We want to congratulate Shawn Porter on a great fight this past Saturday, June 25th, 2016, at the Barclays Center in Brooklyn, NY.

This anticipated fight went the distance for the WBA welterweight Title. The fight pace never let down. Between the two fighters 1200+ punches were thrown in this fight.

As the fight went into championship rounds, Shawn’s pace never slowed down. He was throwing and moving in the 12th just the way he was in the 1st round. Shawn’s fitness showed strong as he never backed off from attacking. After 12 action packed rounds, Shawn Porter lost a close decision unanimous 115-113 to Keith Thurman. With all three judges reaching 115-113 in different ways, you can see how the much there was to see in this great fight. This will go down as one of the greatest fights of the year.

Scorecards from Porter vs Thurman 2016

Keep up the great work Shawn Porter! We are proud of you and will go to war with you any day. Excerpts from the Premier Boxing Champions Fight Coverage (JUN 25, 2016 / BY PBC EDITOR):

In a crowd-pleasing, blood-and-guts brawl, Thurman (27-0, 22 KOs) overcame the bullish Porter (26-2-1, 16 KOs) to eke out a unanimous decision before a crowd of 12,718 at Barclays Center in Brooklyn, New York. All three judges scored the contest 115-113. The fight was expected to be a high-caliber war of skills and wills, and it was just that, as Thurman attempted to use upper-body movement, stay off ropes, clinch, and catch Porter ducking into hooks and uppercuts. At the same time, the 28-year-old challenger often effectively executed his short inside game, closing distance and occasionally smothering and battering Thurman to the ropes.

Underscoring how competitive this long-anticipated fight was, Porter had the slightest of edges in overall punches landed (236-235), but Thurman connected on more power shots (203-177). The longtime friends combined to fire more than 1,200 punches at each other, the overwhelming majority thrown with bad intentions. 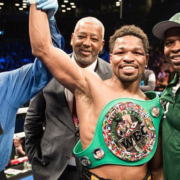 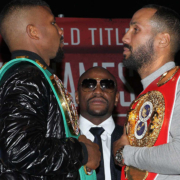 Badou Jack Ready For DeGale, Admits Move To 175 is Near